After the teams had finished their 36 hour marathon development effort we had a Showcase event in the office canteen. The rest of the Reykjavik office was invited along to try out the games people had made whilst enjoying a few beers. During the Showcase we ran some voting with each person able to vote for one project to be the Player’s Choice. Team Yellow Brick were the winners with their take on the Land of Oz. You play the Tinman desperate to get a heart in order to win over Glinda and have her accompany you to the Valentine’s Day Ball. Each stage of the game sees the Tinman attempting to steal the heart of one of the other famous characters from the Wizard of Oz as part of a bloody rampage. Between each stage the story unfolds via some rather lyrical poetry. The game was built in HTML5 using the Phaser framework.

A little bit of poetry. 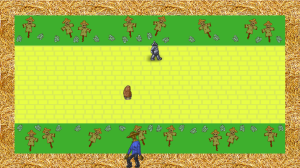 Fighting the Scarecrow to rip out his heart.

Tomorrow I’ll wrap up with a quick look at the rest of the games.

Be the first to start the conversation!